The Importance of Time in the Market, Not Timing the Market

The Importance of Time in the Market, Not Timing the Market

Volatility has spiked and most areas of the market have sharply corrected, making it an understandably difficult time to be an investor. The short-term gyrations in the market and the emotional response it elicits should not derail your long-term investment strategy. And as always, your Cape Cod 5 investment advisor stands ready to answer any questions you may have as we ride out this period of market volatility. Below we’ve provided some commentary from our perspective regarding the current state of the market – and what history tells us about the importance of staying the course during a bear market.

The COVID bull market officially ended on June 13 and the S&P 500 ushered in its bear market on June 14, closing more than 20% below its January 2022 peak. While the losses posted thus far in the market can no longer be characterized as an ordinary correction, it is important to put the current declines in perspective. The S&P 500 still enjoys a 12.97% annualized return over the past 5 years (as of 6/17/22), leaving investors with strong positive cumulative returns. While this data point should somewhat ease concern, behavioral finance reminds us that, even if the magnitude of the loss is far less, losses are typically “felt” more deeply than gains, which reinforces negative sentiment and tempts investors to get out of the market to stem their losses. 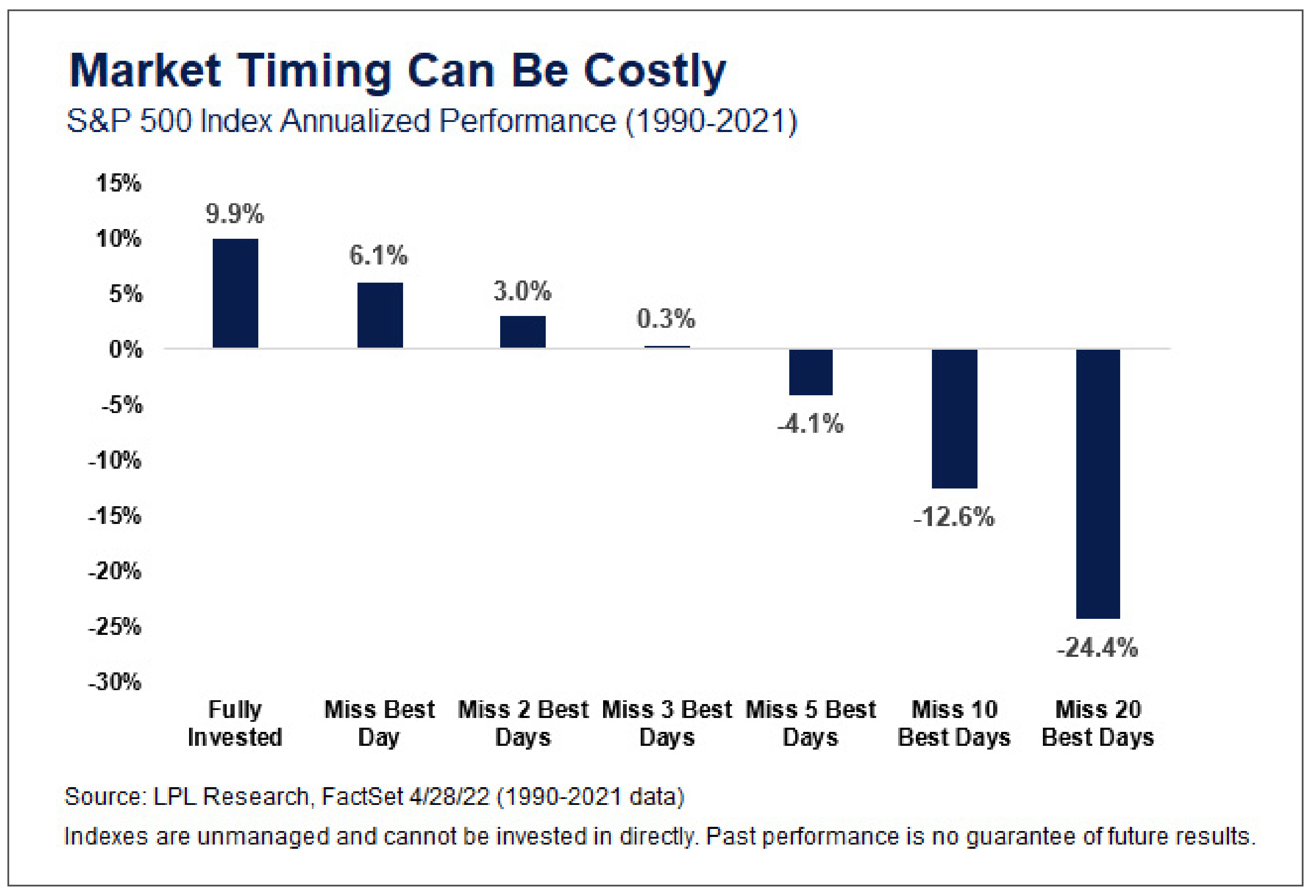 This chart is a reminder of the rewards of owning stocks in the long run and the risks to your investment performance if you miss out on just a handful of powerful rallies. Over the 31 year period above, there were periods where the S&P 500 declined precipitously, such as the dot-com bubble in 2000-2002 and the Great Financial Crisis in 2008-2009. Longer term, however, the S&P 500 Index still rose an average of 9.9% per year during that time.

If an investor were to have missed the 10 best days in the market over that three decade period, they would have experienced vastly different returns. Imagine missing only the best 3 days – your annualized return would have fallen to 0.3% with even more dire returns if you missed the best 10 days over that same period. This illustrates the value of staying invested and the importance of time in the market as opposed to timing the market. 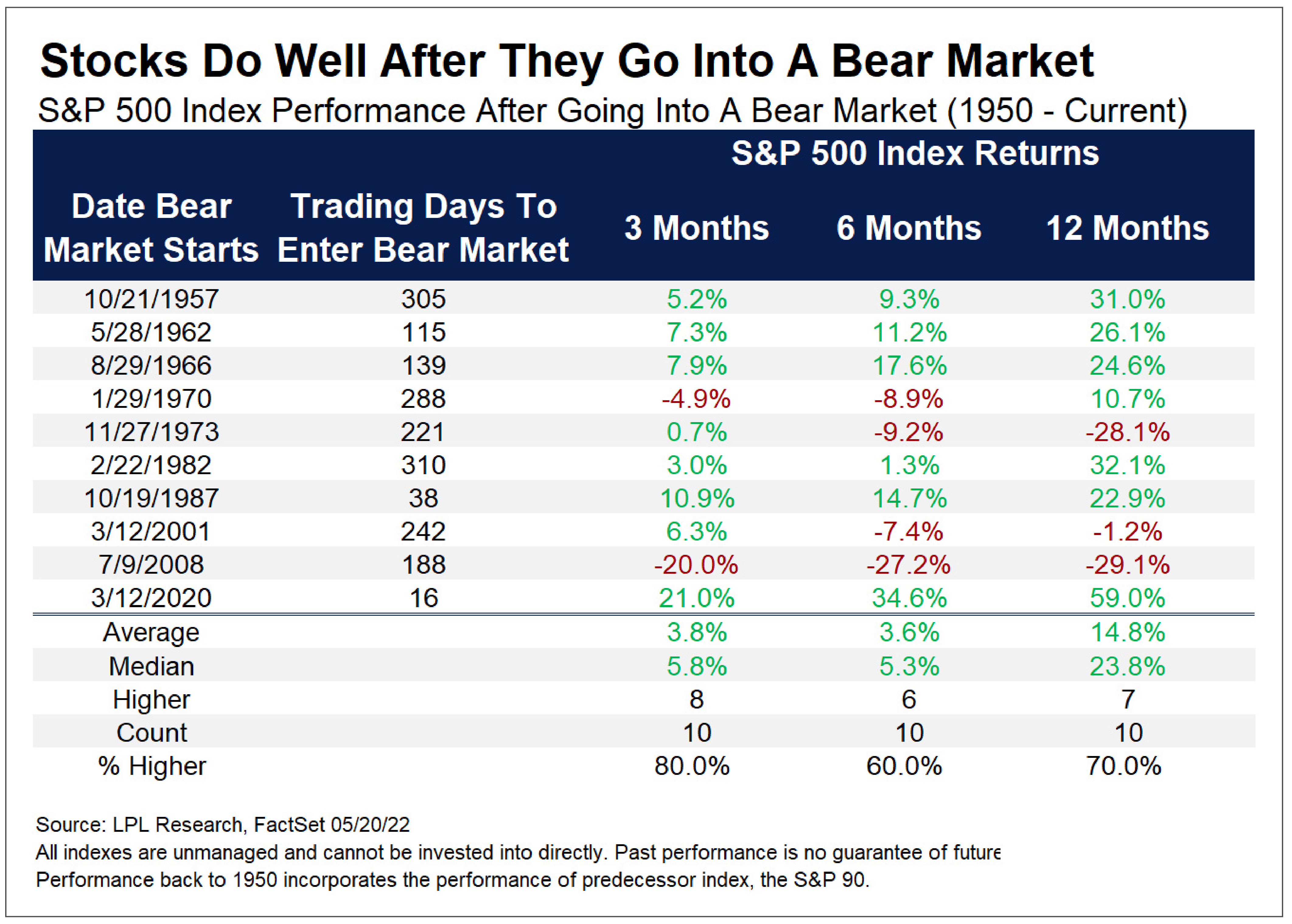 Bear markets can be brutal, but the chart above may help long-term investors feel more comfortable about staying invested. According to LPL Research, looking out three, six, and twelve months later, the market is higher more than half of the time, with a median gain of nearly 24% a year after the start of a bear market. Only three times were stocks lower – and that coincided with a major recession. While the odds of a recession grow, it is expected to be shallow and short. The recovery timetable is difficult to predict, but we are confident stocks will move to a new high in the long run.

At Cape Cod 5, one aspect of our mission is to reduce risk through diversification of equity and fixed income investments. We employ a beneficial strategy of rebalancing accounts on a regular schedule, and extreme market moves are also potential opportunities for rebalancing or modifying existing account holdings. To that end, we advocate for long term investors to view this downturn as an opportunity to selectively add to their portfolios on market weakness.

On Wednesday, the Fed delivered its first 75 basis point rate hike in decades and telegraphed that an additional 50-75 basis point hike could be expected in July, signaling a return to a hawkish playbook with a more aggressive approach to rate hikes. This about-face came as a bit of a surprise to some market participants since Fed Chair Powell recently told reporters that an increase of that magnitude was not currently being considered.

The original plan was to raise rates by 50 basis points, but the Fed revised upward its rate hike after the May Consumer Price Index (CPI) report - published on June 10 – surprised to the upside with inflation continuing to climb instead of the anticipated moderation expected by economists.

As a result, the Federal Open Market Committee (FOMC)’s pace and path of interest rates was altered to reflect the Fed’s resolve to fight inflation at all costs. The newly released Fed fund rate expectations (dot plot chart below) now indicate the rate to hit 3.4% by year end as compared to 1.9% projected by the FOMC in March. Recognizing the economic impact of front-end-loading bigger rate increases will come with an economic cost, the FOMC downgraded its GDP projections and boosted the forecasts for unemployment, thereby further narrowing the odds of a “soft landing” for the economy. 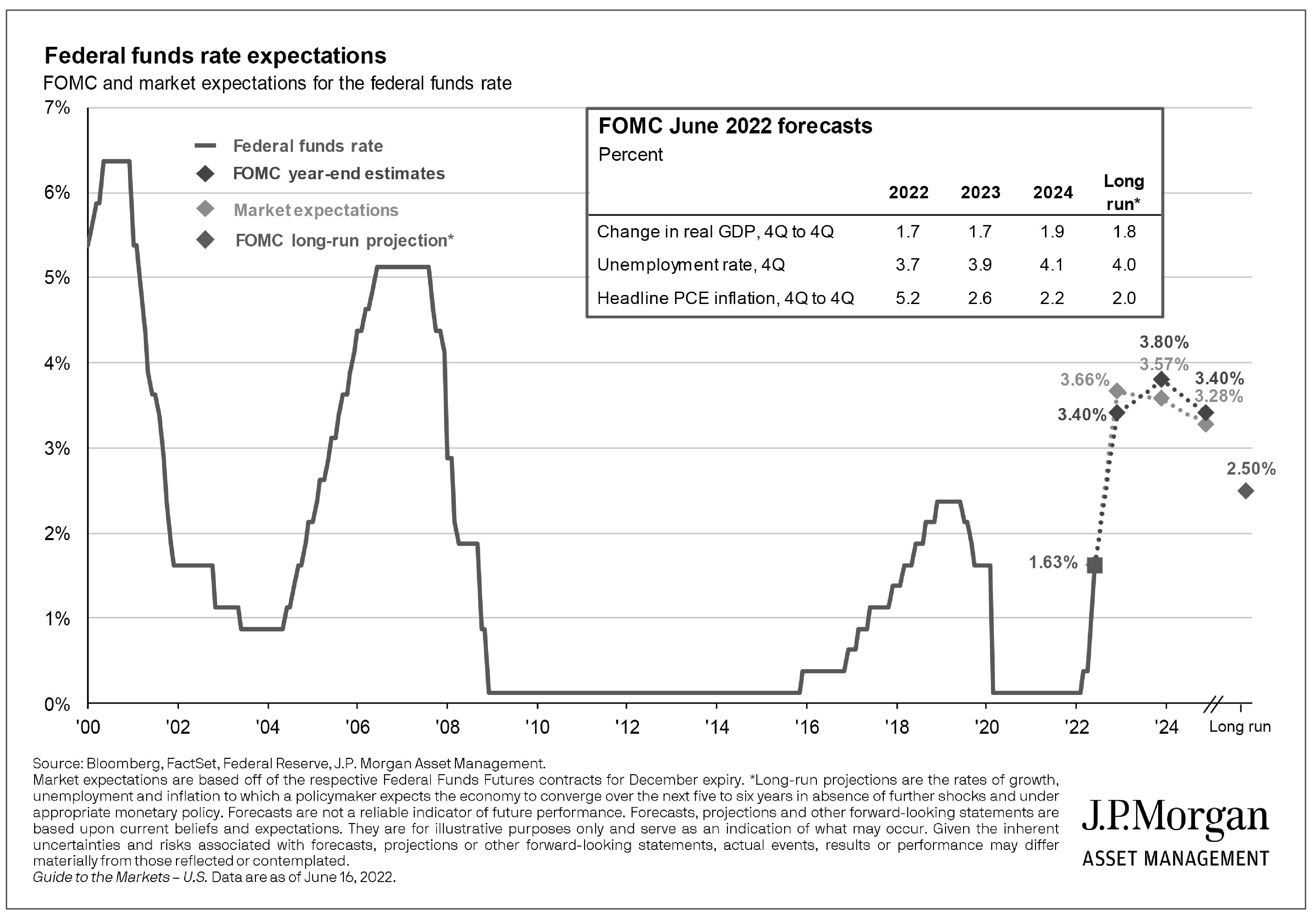 By raising rates, the Fed hopes to alleviate demand pressures in the economy, driving down consumption and investment and thereby cooling inflation. The Fed’s tough talk on inflation may help contain future inflation expectations before they become embedded and negatively influence future economic decisions.

Overall, the message coming out of the June 15 meeting appears clear: a priority has been placed on the mandate of price stability, even if it’s at the expense of the labor market and, by extension, economic growth.

The full impact of more aggressive rate hikes may actually be viewed as a positive by the financial markets. It certainly can be unsettling looking at month end statements in times of market volatility, but history suggests that staying the course is generally the best approach.

Thank you for the trust you place in Cape Cod 5. If you have particular questions about your portfolio, please contact your Investment Officer. We’re here to help and it remains our privilege to serve you.