Our review of the Market for 3rd Quarter 2019

The third quarter of 2019 was a dizzying three months for many investors, punctuated with record highs and lows. Stocks surged to new record highs in July on expectations of a Federal Reserve (Fed) rate cut - the first in a decade and a sharp reversal from the gradual rise in rates that began in 2015. While stocks touched new highs in July, government bond yields tumbled in August, with the 30-year U.S. Treasury reaching record lows.

After nine rate increases that began back in 2015, the Fed abruptly reversed the course in August and cut rates by .25% (25 bps). The cut was in reaction to yield curve inversion, tariff uncertainty and slowing economic data. With inflation below target, the Fed felt a cut could support a continued expansion without raising inflation concerns. In September the Fed followed up with an additional 25 bps cut.

Occupying headline for most of 2019, the U.S. - China trade war has adversely impacted both economies as well as the export-dependent Eurozone. European Central Bankers responded with substantial monetary stimulus, however the combined headwinds of Brexit uncertainty, global trade disruption, negative economic growth in Germany and political unrest suggest another difficult year for the Eurozone economies.

The U.S. economy has held up well during the third quarter. Non-farm payrolls increased again in September. The month added another 136,000 jobs, lowering the unemployment rate to 3.5% from 3.7% in August - the lowest rate since December 1969. Wage growth climbed 2.9% as wages continue to outpace inflation in 2019.

Market volatility aside, it has been a good year for U.S. stocks. Year-to-date, the S&P 500 returned 20.55% through September 30, outpacing median expectations by a wide margin. The FAANG stocks - Facebook, Amazon, Apple, Netflix and Google - delivered mixed results in the third quarter. Known to move in tandem, the wide range returns (-27.14% to + 13.55%) in the quarter was unusual for the group.

Utility, real estate, and consumer staples were the top-performing sectors for the quarters as investors sought safety amidst market volatility. Energy was the worst performing sector for the quarter. An attack on a critical Saudi Arabia oil facility in mid-September drove energy stocks higher; however, quick infrastructure repairs led to oil output resuming normal production levels within weeks.

The Fed delivered on the much anticipated (and expected) rate cut in August and then again in September. Prices rebounded higher as yields dropped. (Bond prices move in the opposite direct of yields). The 10 year U.S. Treasury bond started the third quarter yielding 2.03%, touching a low of 1.47% in early September, before rebounding to finish the quarter at 1.68%.

The yield curve inversion received significant attention in the quarter. Often seen as a precursor to recessions, investors became increasingly nervous during the brief inversion (when 2 year Treasuries yield more than 10 year Treasuries).

The current yield curve remains uncharacteristically flat with less than 60 bps separating the lowest and the highest maturities at quarter end. 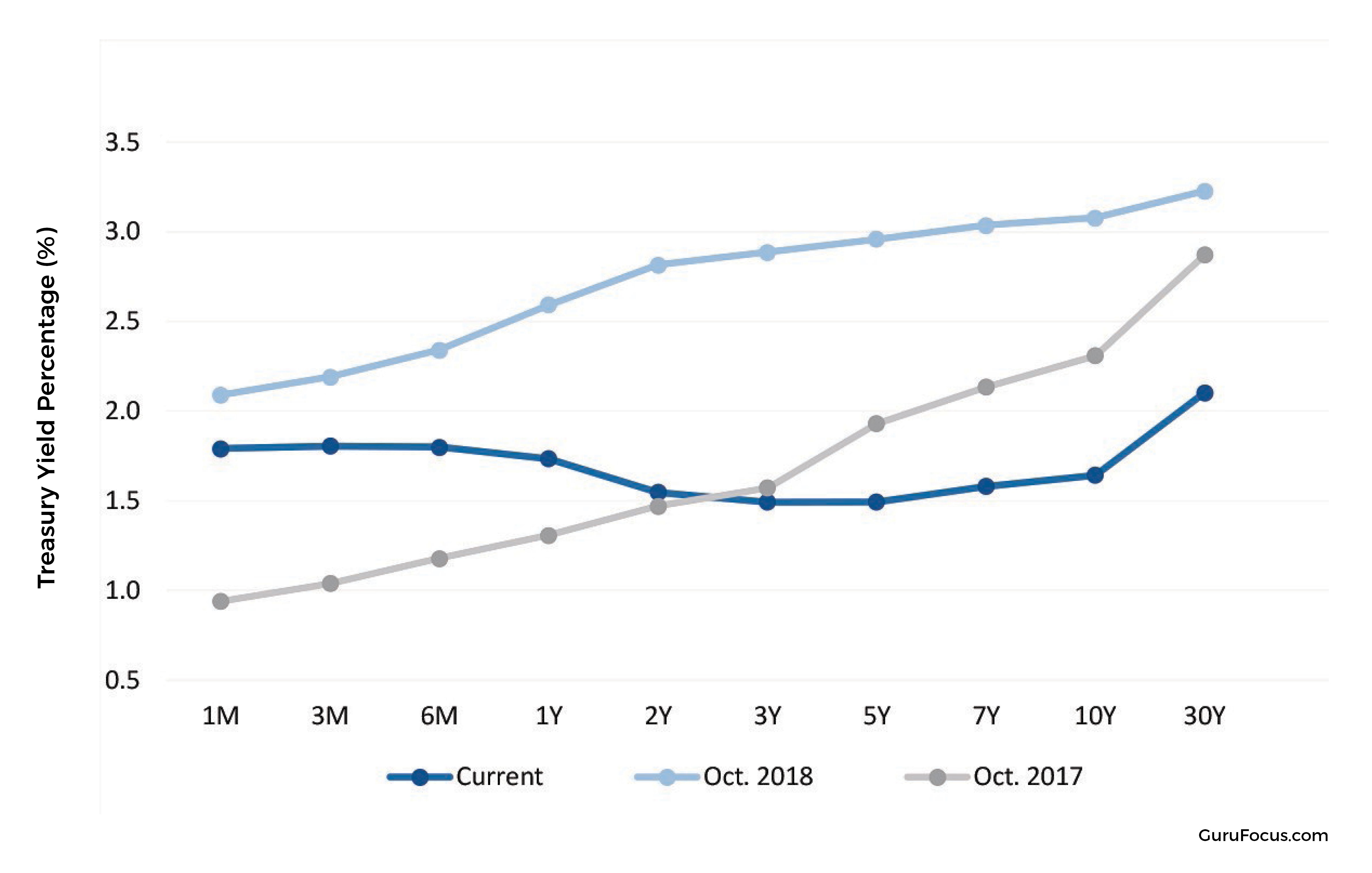 The economic narrative in 2019 has been dominated by trade and monetary policy. Headline news on either issue has been largely responsible for an uptick in stock market volatility. While the U.S. consumer market remains healthy, weakness in global trade has dampened economists' global growth outlook.

Overall, recent economic data suggest a more cautious view leading into the final quarter of 2019. The current expansion is the longest in modern U.S. history, and although the likelihood of a recession remains low, a slowdown at some point is to be expected. Currently, we see the combination of strong employment and wage growth, consumer confidence and low borrowing costs supporting continued growth for the U.S. economy.