The stock market recorded its 15th consecutive month of positive returns to start 2018. Supported by pro-business tax reform and the continuation of a synchronized global recovery, the S&P 500 returned more than 5% in January – the biggest January gain in 30 years. Following along, the Dow Jones Industrial Average (a composite of 30 large, well-known companies) closed above 25,000 for the first time ever.

The strong start was short lived. In February, U.S. equity markets experienced their first correction (a drop of more than 10%) since early 2016. The sell-off was primarily attributed to investors’ increased sensitivity to higher interest rates, concerns about the efficacy of fiscal stimulus and central bank policy shifts. 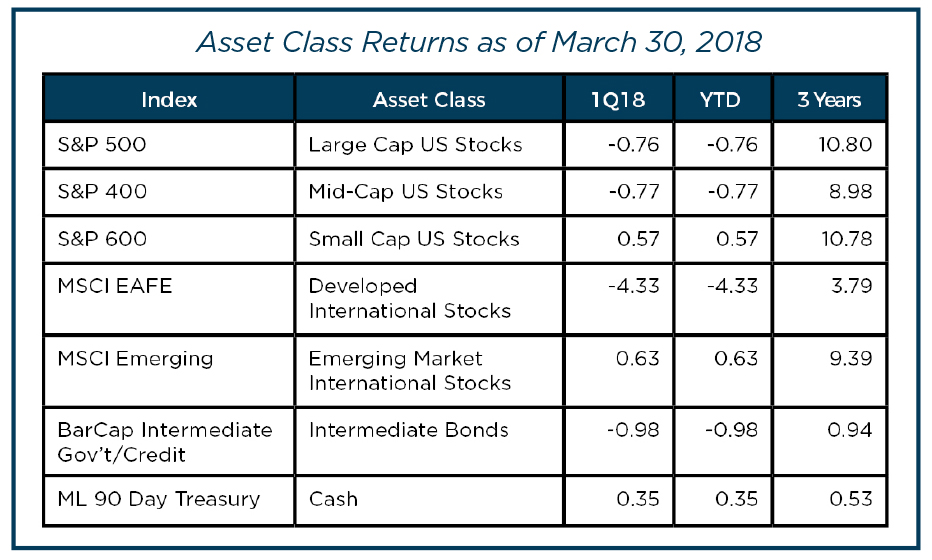 Underlying economic data reflects a relatively healthy picture of the U.S. economy. Economic growth was revised higher, to 2.9% quarter over quarter, in the fourth quarter of 2017. The job market has been remarkably strong with payroll gains of 313,000 in February, coming in 100,000 higher than consensus estimates. The unemployment rate remained low and stable at 4.1%. Interest rates have been increasing, yet remain low from a historical perspective and supportive to the corporate and consumer economy.

Following a pause in January, the Federal Reserve increased the federal funds rate by 0.25% to a range of 1.50% to 1.75%, while maintaining expectations for three hikes in 2018, but also raised the number of hikes forecast in 2019, citing stronger growth expectations.
During the quarter, the Trump administration announced a 25% tariff on imported steel and a 10% tariff on imported aluminum. The administration followed up weeks later with an announcement of an additional $50-$60 billion of tariffs on Chinese goods. While the trade war rhetoric has increased, final implications remain uncertain.

Globally, a recent International Monetary Fund (IMF) report highlighted a pickup in growth in 120 economies representing three-quarters of global gross domestic production (GDP), the broadest synchronized global growth upsurge since 2010. The IMF also raised its global growth forecast for 2018 and 2019 to just below 4% per year. 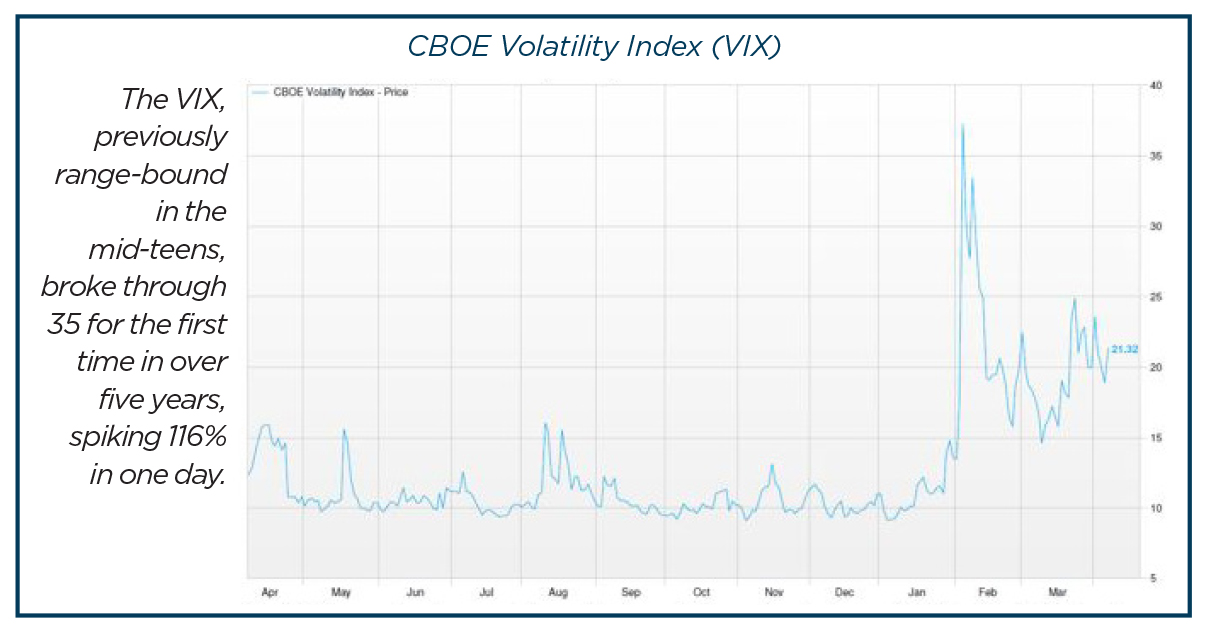 February saw the return of volatility as major indices lost more than 10% of value over just nine trading days. After years of stability, volatility, as measured by the CBOE Volatility Index (VIX), spiked.

For technology investors, the first quarter of 2018 was very volatile. The information technology sector was one of two sectors with positive returns in the quarter. This sector rose 3.2%. This positive return was in spite of the FAANG stocks, comprised of Facebook, Apple, Amazon, Netflix and Alphabet (Google), which collectively lost $324 billion in market capitalization in the final two weeks of the quarter. The only other sector with positive returns was Consumer Discretionary, posting a positive return of 2.76%, buoyed by Amazon’s 23.8% return. Telecom was the biggest underperformer (-8.66%) followed by Consumer Staples (-7.77%). Although oil prices rose approximately 7% in the quarter, the energy sector fell (-6.58%).

Improving economic data, consumer and business optimism, tax reform and contained inflationary pressure has been good for equity prices and fixed income yields alike for much of the past 18 months. The 10-year Treasury bond increased to 2.95%, a four-year high, before ending the quarter lower at 2.74%. Overall, bonds delivered negative returns for the quarter (prices move inversely to yields). Short-term rates, as measured by the 3-month U.S. Treasury bill, have tracked Federal Reserve policy and increased by almost 1% over the last twelve months. 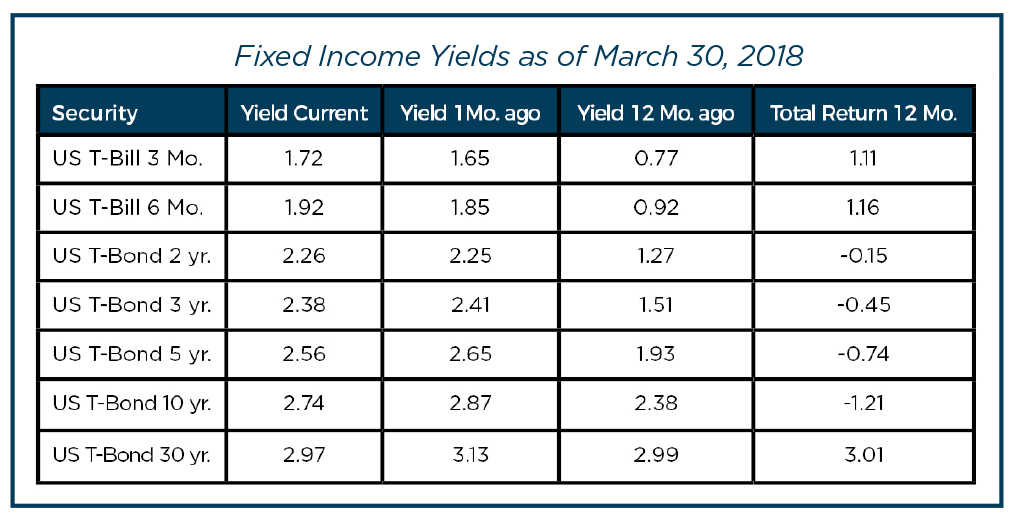 U.S. bond yields remain attractive compared to other countries; however, at some point, rising interest rates could become competition to other investment classes. This “crowding out” effect could negatively affect certain segments of the equity market such as high dividend paying stocks.

While large market declines are unnerving, it is important to recognize stocks experience material drawdowns intermittently. Since the current bull market start in 2009, there have been nine such corrections, or about one per year on average. In many ways, the stock market is tethered to the economy; however, that tether is flexible, stretching forward at times and, on occasion, snapping back. In those instances, it is important to assess the fundamental strengths of the underlining economy. With the context of strong global economic data and improving earnings, recent volatility may be more about reigning in excessive optimism in favor of a more moderate outlook. We remain constructive on equities based on the expectation of improved earnings, moderate rate hikes and more reasonable valuations going forward.