Buoyed by the prospect of renewed Federal Reserve support, the stock market overcame escalating trade tensions to end the second quarter at record highs. The S&P 500 has risen 18% year-to-date (ended 6/30), extending the decade-long bull market. Fixed income assets also rallied as slowing global growth, particularly in the Eurozone, lowered bond yields around the world. The yield on the benchmark 10-year U.S. Treasury stood at 2% at quarter-end, falling nearly a half-percentage-point from the end of March.

The U.S. economy grew at a robust 3.1% annualized rate in the first quarter of the year. Revised figures released by the Commerce Department at the end of June reduced consumer spending growth to 0.9% in the first quarter from previous estimates of 1.3%. The decline in consumer spending was partially offset by modest upward revisions in business investment, exports, and government spending. Spending on home building and improvements performed better than expected, shrinking 2% compared to previous estimates of a 3.5% decline.

While sales of new homes fell in May, a pick-up in existing home sales provided some confidence about the state of the overall housing market. Late last year the housing market lagged behind the booming economy as higher mortgage rates discouraged buyers from purchasing. Mortgage rates have fallen more than a percentage point since last year, making properties relatively more affordable for buyers looking to finance their purchase. In addition, low unemployment and rising wages are drawing potential buyers back to the market, creating additional demand.

The labor market remains resilient as U.S. employers added 224,000 nonfarm payrolls in June, rebounding from 72,000 jobs added in May. The unemployment rate inched up from a 50-year low to 3.7% as more Americans returned to the labor force. In a sign of the strong demand for workers, the quantity of available jobs exceeded the number of unemployed Americans by 1.4 million. Companies have added jobs for 105 consecutive months - a record for job creation. Hiring growth has been broad-based with a healthy mix of industries represented. Bright spots in June hiring included healthcare, transportation, and warehousing. Manufacturing employment and construction firms had moderate growth while retailers cut back on positions.

The stock market performed well in the second quarter and marked its best first-half performance since 1997. The S&P 500 gained 4.3% for the quarter, while the Dow Jones Industrial Average rose 1.3%, and the NASDAQ returned 2.3%. Some of the best performing sectors during the period were also subject to the wildest swings. Performance in Technology stocks, up 6.06%, was whipsawed by trade rhetoric with China as many of their profits rely on Chinese markets. Materials stocks, up 6.31%, also had volatile performance as commodity prices reacted to investor concerns over mixed economic data.

In early June, Federal Reserve Chairman Jerome Powell addressed concerns over how trade uncertainty and slowing global growth could impact the U.S. economy, signaling the central bank was closely monitoring the situation and could respond with rate cuts if the economic outlook did not improve. Investors received the news positively, igniting the stock market’s month-long climb towards record highs. 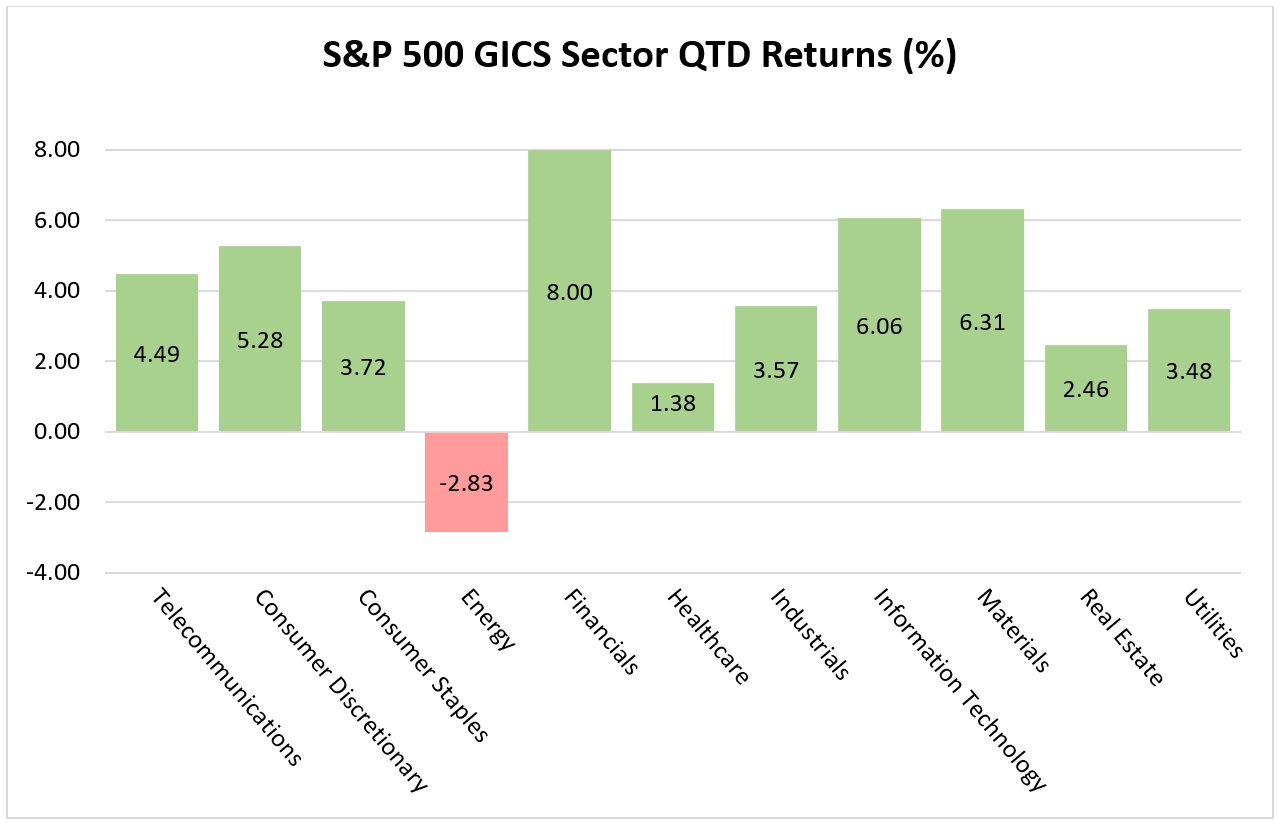 Bond prices rallied as pivots in central bank policy drove yields around the world lower in mid-June. Slowing global growth, especially in Europe and China, drove the Federal Reserve and European Central Bank (ECB) towards loosening monetary policy rather than rate normalization. The recent rally kicked off when ECB President Marioraghi signaled officials could launch new stimulus measures, including a decrease in interest rates, which are already negative. The Fed maintained rates, but signaled a potential cut in the coming months, defying expectations held earlier in the year for two rate hikes. The situation, which few economists or investors predicted months ago, heightened demand for U.S. government debt pushing the 10-year Treasury yield down to 2% for the first time since 2016.

As we start a new quarter, we still have trade and tariffs dominating the headlines as the G20 summit starts in Osaka, Japan. Early indications point to a softening stance by both President Trump and President Xi Jinping, which should give the market some comfort. Economic numbers have slowed from the previous trend, but are still pointing to an economy growing at a modest pace. Individual company earnings are also expected to slow as the trade tensions put expansion plans on hold, however lower bond yields, an accommodative Federal Reserve Bank, and high consumer confidence, should be enough to keep this U.S. economic expansion going.