Cape Cod 5 provides links to other websites for convenience and information purposes only. Users should be aware that when they select this link to an external website, they are leaving the Bank's website. Cape Cod 5 is not responsible for the contents of any linked site or the contents of any link contained in a linked site. The inclusion of a link does not imply endorsement by the Bank or the site, its content, advertisers or sponsors.

Much like our beloved Red Sox, the stock market experienced a fall slump. Fans and investors will likely still remain loyal to both.

The market took a pause from its winning ways, as all three of the major averages moved lower for the first monthly decline since early this year. The S&P 500 index did manage to have a fractional gain for the quarter, while the NASDAQ and the Dow ended lower. Selling pressure and volatility increased, as renewed inflation fears and Washington wrangling returned as the close of the quarter approached. Not all was lost as some positive trends continued, including the extended advance of continuing strength in corporate earnings. In addition, companies are projecting earnings growth as we begin to see estimates for the coming quarters. This bodes well for the remainder of 2021 and may indicate a favorable earnings trend as we enter 2022. Adding to the positive environment was better news on the COVID-19 front. More states started to see a return to a more normal way of life, after a wave of infections from the Delta variant receded.

The Federal Reserve has maintained a very accommodative posture during the pandemic which is one of many factors that has contributed to the stabilization of the US economy. In the US, GDP exceeded 6% in each of the first two quarters of 2021. The Fed has signaled removing liquidity from the economy by “tapering” the $120 billion in monthly bond purchases sooner than originally predicted. It seemed clear that they were attempting to soothe investors’ minds by keeping ample liquidity in the system and stating that any reduction in purchases would be gradual. This indication should continue to provide support for the equity markets. The Fed has reduced its 2021 GDP growth forecast from 7% to 5.9%, and we anticipate Q3 growth to approach 5.5%. Looking ahead, 2022 forecasting has improved to 3.8%. Inflation expectations are also being slightly increased, with a more modest pace projected for a jobs recovery.

Market volatility also surfaced, causing apprehension for investors as they advanced through the third quarter. The stock market moves became more exaggerated with close to 1,000 points lost in a few days. On one particular Monday, investors were surprised by news out of China that Evergrande, the second largest property developer in the country, was having some financial difficulty in meeting certain upcoming interest payments. The news became less ominous as the week went on, but the final outcome has not been decided. Some declared a possible "Lehman Moment" for China, but thankfully as of now, Evergrande will not lead to a market meltdown. In fact, by the end of the week, China signaled some support for the company. The company did miss a scheduled interest payment and as of this writing is in a 30-day grace period. What type of support, and to what extent China is willing to deliver, may come into play during the grace period. The final outcome may shed some clues on how liberal China will be in allowing companies the freedom to operate in their economic system, and on whether this issue will be isolated to Evergrande or points more directly to overall weaknesses in the Chinese real estate market. 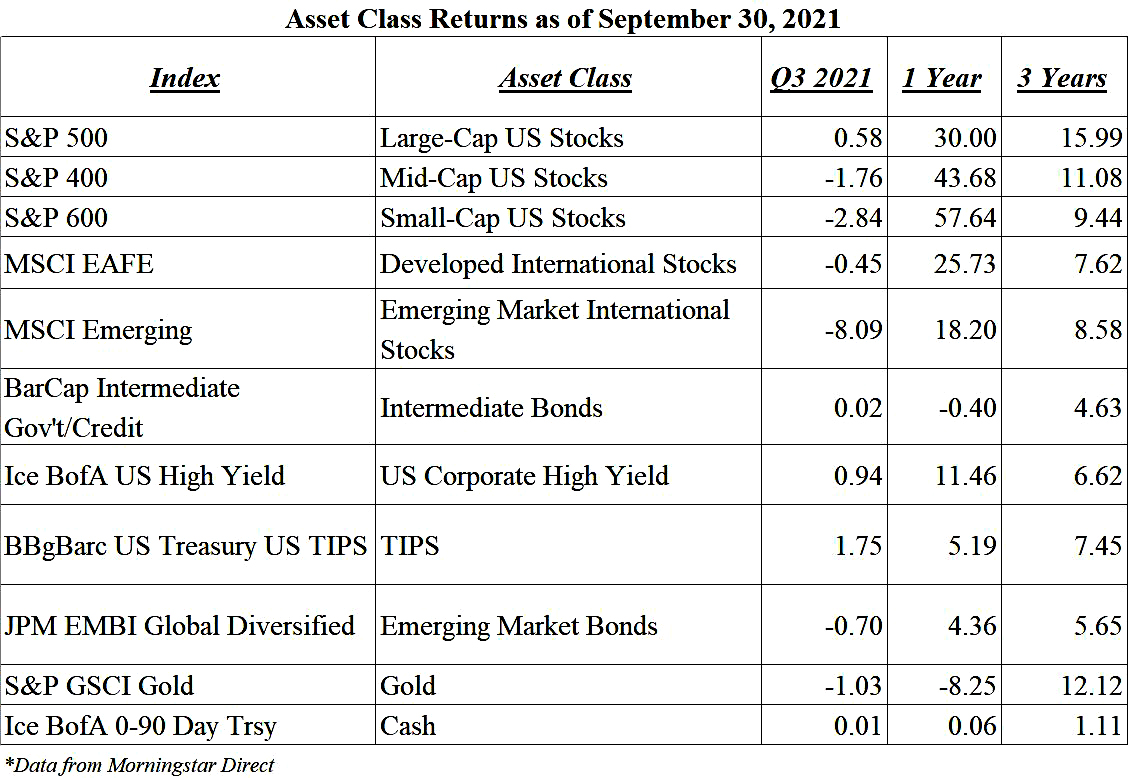 The latest September FOMC meeting left economists lacking any concrete timing or amount of the upcoming taper. The current pace of bond buying, $120B a month, will continue, but signs are pointing to not only a slower taper, but a possible rate increase.

All but one Fed governor is looking for a rate increase in 2023, up from last quarter. About half now expect a possible hike in 2022 - again, a slight increase from last time.

Another interesting piece of news coming from the Fed is the departure of two of their regional governors, as President Rosengren from Boston and President Kaplan from Dallas both recently announced retirements. It is worth keeping an eye on how the slots are filled and any implications on future monetary policy.

The pace of removing liquidity from the economy still remains very gradual. This should continue to provide support for the equity markets.

Rates showed little reaction to the FOMC September meeting and had drifted higher to the 1.40% level. Inflation fears have started to creep back into the economy recently and pushed the 10 year bond to 1.54%, the highest level in the past 3 months. Inflation is expected to be transitory and should start to recede next year.

Part of the inflation story, supply chain issues, surfaced again in the quarter and little progress has been made to resolve the challenges with the movement of goods. California ports are the major bottleneck with many unable to unload tankers. This will be something to watch as goods are delayed, putting the upcoming holiday shopping season in jeopardy for the retail stores awaiting the arrival of these items.

Two pieces of recent economic data, new home sales (seasonally adjusted annual rate of 740K in August) and Durable Goods Orders (+1.8%), came in above expectations. This could be a positive sign for the economy as we transition into the fourth quarter.

Reported earnings for the second quarter of 2021 achieved growth rates of close to 90% year over year. The increase stretched across many industries and handily beat estimates1. Earnings estimates for the coming quarters reflect ongoing positive projections.

Financials turned in the best sector performance for the quarter, helped by big banks. Healthcare was not far behind as good news on vaccines and drug developments contributed to the outperformance. Industrials and Energy ended up with negative sector performance. Energy companies are one of the leaders in YTD performance, as many capitalize as oil prices climb to over $78 a barrel, the highest price for Brent crude oil in almost 3 years. Given the strength in the overall market this year, all sectors have positive year-to-date returns. 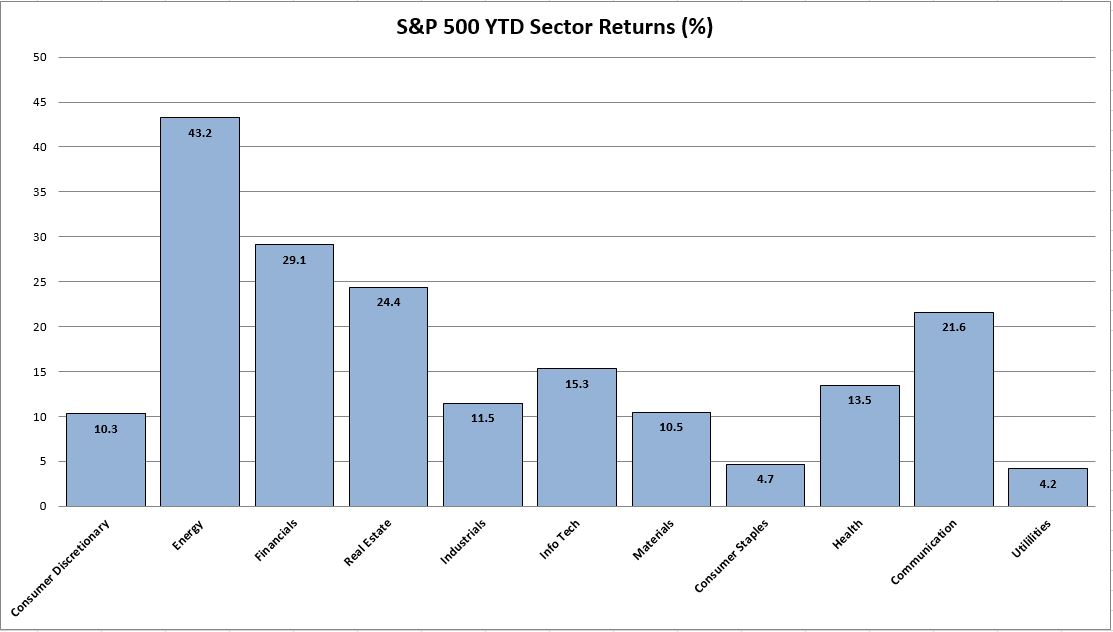 Increased inflation concerns have leveled the playing field in fixed income returns. With higher inflation in evidence, TIPS (US Treasury Inflation Protected Bonds) took the lead over many fixed income classes returning 1.75%. Taxable bonds, as measured by the Barclays Intermediate Government Credit Index, ended the quarter virtually even with a .02% return and High Yield Bonds returned .94%. Internationally, emerging market bonds concluded the quarter in a similar fashion with a -.70% return. TIPS have outperformed the Barclays Intermediate, High Yield and emerging fixed income YTD. The 10-year Treasury Bond yield dipped to 1.19% in the summer months before rebounding to 1.52% at the end of the quarter. The summer dip in yields was a reaction to the Fed’s June meeting minutes, which revealed mixed opinions by officials over when to start scaling back purchases. The yields at the close of the quarter were the highest levels since early summer. The move higher was a natural reaction to more talk of a taper and more suggestions of inflation in the months to come. Chairman Powell reported that rates will remain at current levels and the Committee does not plan to begin reducing bond purchases this year. 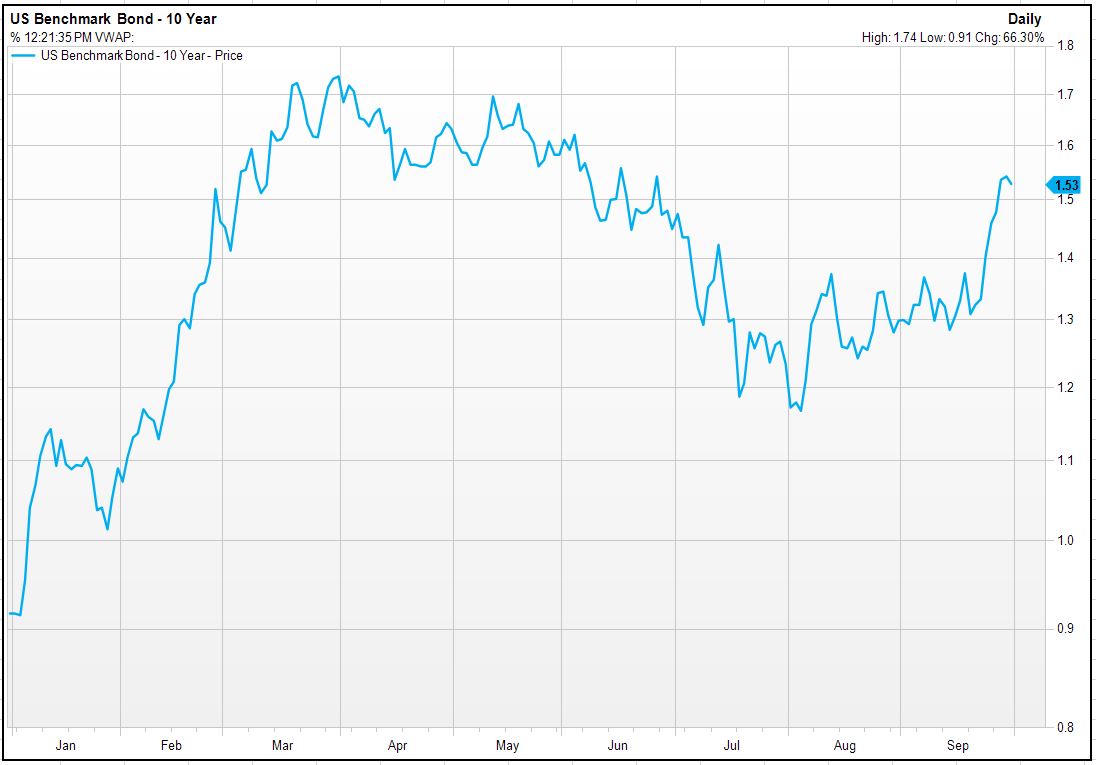 Investors enter the final quarter with a few tailwinds that include a constructive equity market environment and a still accommodative Fed that is in no rush to remove any significant stimulus. Earnings should continue to move ahead at a steady pace and this could help the markets close out the year on a positive note – much like we’re hoping for the Red Sox this fall! Most importantly for all, we hope that the great strides made in managing COVID-19 and its variants will continue at the fastest pace possible.

Since this will be our last quarterly commentary before year end, we wish you all a happy and healthy holiday season.