On August 18, the S&P 500 reached a new all-time high, managing to rally from a pandemic-induced sudden and severe bear market to new highs in just 126 trading days. Investors conditioned to “buy the dips” (a bottom in corporate earnings), the emerging view of an economic recovery, and roughly $2 billion in hourly asset purchases by the Fed all contributed to the rally.

The Institute of Supply Management (ISM) non-manufacturing index is an influential report that assesses business conditions in a diversified set of industries. A reading above 50 indicates expansion. The August reading was 57.8, the fourth month in a row with a reading above 50. Of the 18 industries tracked, 16 reported growth.

The U.S. has regained approximately 10 million of the 22 million jobs lost in the pandemic. The unemployment rate dropped below 8% in September from a high of 14.7% in April. Initial unemployment claims have remained steady in recent weeks and are substantially below July figures.

The initial report of third quarter Gross Domestic Product (GDP) will be released by the Bureau of Economic Analysis on October 29. Estimates have risen dramatically over the course of the last 90 days. The Atlanta Fed’s GDPNow estimate at 34.6% is roughly double the previous record set in 1950. For the full year, the Conference Board is forecasting annual U.S. GDP growth of -3.8% with a return to positive annual growth in 2021.

Consumer confidence increased sharply in September. The Present Situation Index, which gauges current market and labor conditions, and the Expectations Index, which is more forward-looking, posted significant improvement indicating consumers are feeling more secure and optimistic about the future.

September was a difficult month for stocks; however, the quarter was quite good with the S&P 500 returning 8.93%. After underperforming mid and small-cap stocks last quarter, large-cap stocks regained top performer status for the quarter. Emerging markets led major asset classes with a 9.56% return over the three-month period. Over the last twelve months, international equities bested U.S. mid and small-cap stocks. 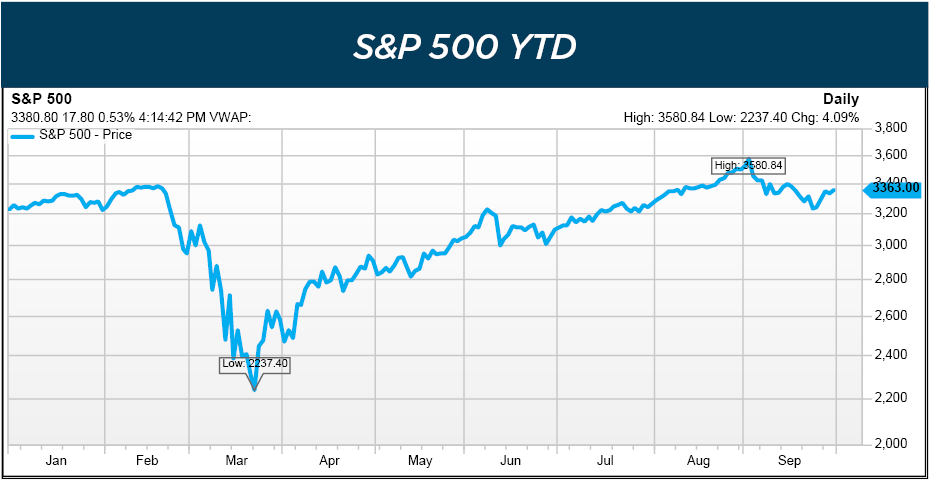 Cyclical sectors tend to outperform in the early stages of a recovery. The strong rebound in economic growth during the quarter propelled Industrials and Materials (both cyclical sectors) to top performers. Energy continued to underperform as global demand remained weak. 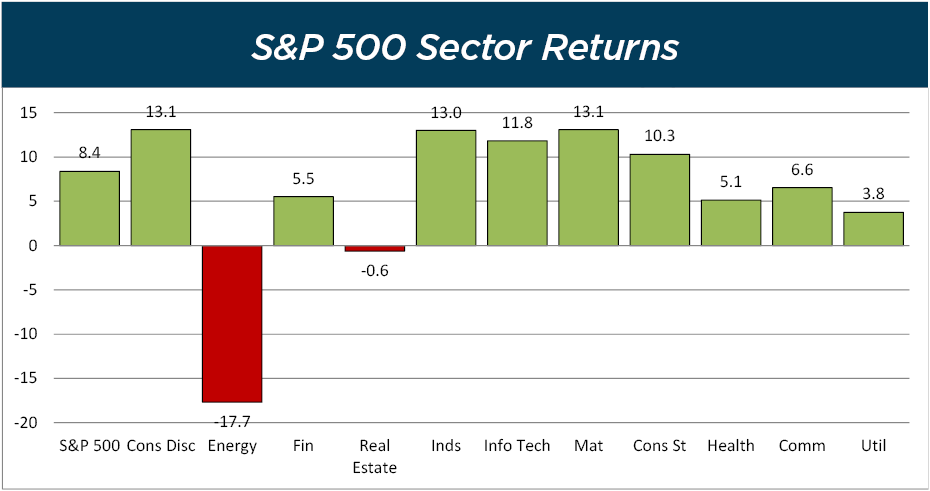 Twelve months ago, 10-year U.S. Treasury yields were roughly 2.5 times higher than they are today. At .70%, the 10-year Treasury yield is below inflation yet remains attractive when compared to other sovereign debt. For example, yields on 10-year bonds issued by Germany, France and Ireland are negative.

Inflation-linked bonds were the standout in the quarter, returning 3.29% with investment-grade corporate bonds and municipal bonds also performing well during the quarter.

Much remains unresolved. We have an economy only beginning to reassert itself. A virus that keeps the world on a short leash and remains largely uncontained. Aggressive fiscal and monetary policy, the efficacy and long-term costs of which are unclear and an election just a few weeks away.

Political, social and policy polarization are top concerns. An election outcome where either party contests results could magnify the intensity of the situation. Resolution could take weeks and follow a number of different scenarios.

Once the election is behind us, the work begins. Virus management, economic growth and relations with China are top priorities. How these issues are handled will influence market volatility and returns considerably. The investment team continues to monitor and adapt portfolios to the changing economic outlook introducing several new asset classes in the quarter. We believe these additions will enhance risk-adjusted returns over an extended period and in a number of different environments.