The unexpected effects of an unprecedented economic rebound have been on full display over the last few months. The speed and magnitude of the recovery had many postulating that the second quarter of 2021 would be the “peak” for economic activity. What led to this and is this in fact a peak in the context of the current economic cycle?

In our view, the better-than-expected recovery currently underway is primarily a byproduct of three issues, one known and two unknown, that all coalesced in Q2.

1. The massive fiscal and monetary stimulus in the U.S. and abroad over the last fifteen months was well documented: a global response orchestrated and choreographed by central banks around the world to support their respective economies through the worst of the pandemic.

2. The first unknown was the length, severity and treatment strategy of the pandemic. Under the Department of Health and Human Services “Operation Warp Speed,” our best and brightest researchers started working on a Covid-19 vaccine. Vaccine development is an arduous process that typically takes years. The fastest developed was the mumps vaccine in 1967, which took four years. Beyond even the most optimistic scenarios, not just one, but three vaccines were approved for emergency use and widely available at scale within twelve months.

The combination of substantial and varied stimulus programs reaching businesses and individuals, as well as successful vaccine development, efficacy and distribution, created an almost instantaneous rush of economic demand - at least from a business cycle perspective. The sudden wave of increased demand caught many industries scrambling to respond, exacerbated by supply chain issues. 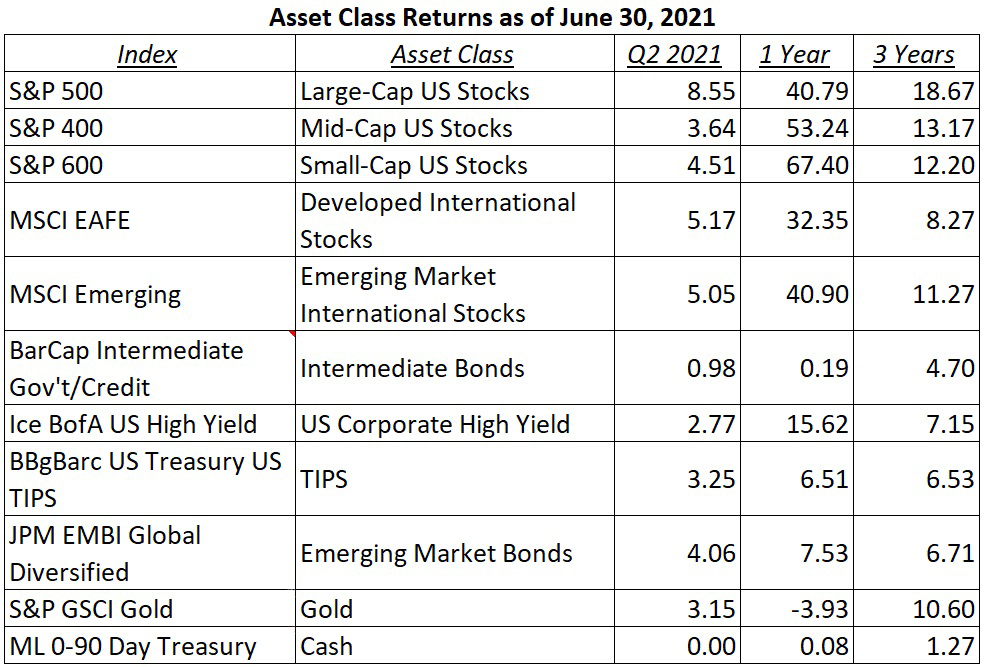 The Federal Reserve’s June meeting carried a slightly less dovish tone. The number of participants forecasting at least one rate hike in 2023 almost doubled from seven to thirteen between March and June. While the Fed admitted to starting the discussion on tapering bond purchases, Fed Chair Powell was quick to note “substantial further progress is still a ways away” and stuck to “transitory” messaging on inflation, conceding that inflation risk could be more persistent at some point in the future. While the Fed has been careful with their communication on the subject, the idea suggests peak monetary policy may be ending.

Despite larger than expected headline and core (excludes food and energy prices) consumer price index data, the 10-year Treasury rate dropped by 29 basis points (0.29%) from the end of the first quarter, suggesting inflation concerns may be on the decline. While many commodity prices have risen rapidly this year, in most cases this in an indicator of imbalances in supply and demand and not necessarily indicative of long-term inflation. Furthermore, commodities are only one of many components of inflation.

The Institute for Supply Management’s (ISM) highly watched Manufacturing and Service indexes have been climbing quickly in recent months. Both hit multi-year highs in the quarter before slowing in June. Many believe ISM data usually peaks about one year after a recession ends.

The broader peak growth theme was highlighted again when both April and May nonfarm payrolls failed to meet expected gains.

The Economic Policy Symposium in Jackson Hole at the end of August will be a closely followed event which may bring more clarity to future Fed policy.

The S&P 500 set 18 new all-time highs in the quarter1. Added to the 15 new highs set earlier in the year, markets have averaged a bit better than one new all-time high each week of the year – quite a run as markets race to catch up with the phenomenal rebound in corporate earnings.

The pandemic-induced earnings trough came in the second quarter of 2020, setting up Q2 of this year as the quarter for “peak” earnings growth. Second quarter earnings growth is expected to be 60%, which would be the largest increase since the 2010 rebound from the great recession.

Sector leadership continued to concentrate in Energy and Financials – top performers from the first quarter. One change of note was the rally in Technology stocks, the second worst performer last quarter, which moved up this quarter. Tech sector performance was a byproduct of the rally in “growth” stocks outperforming in the later part of the quarter as inflation fears subsided. 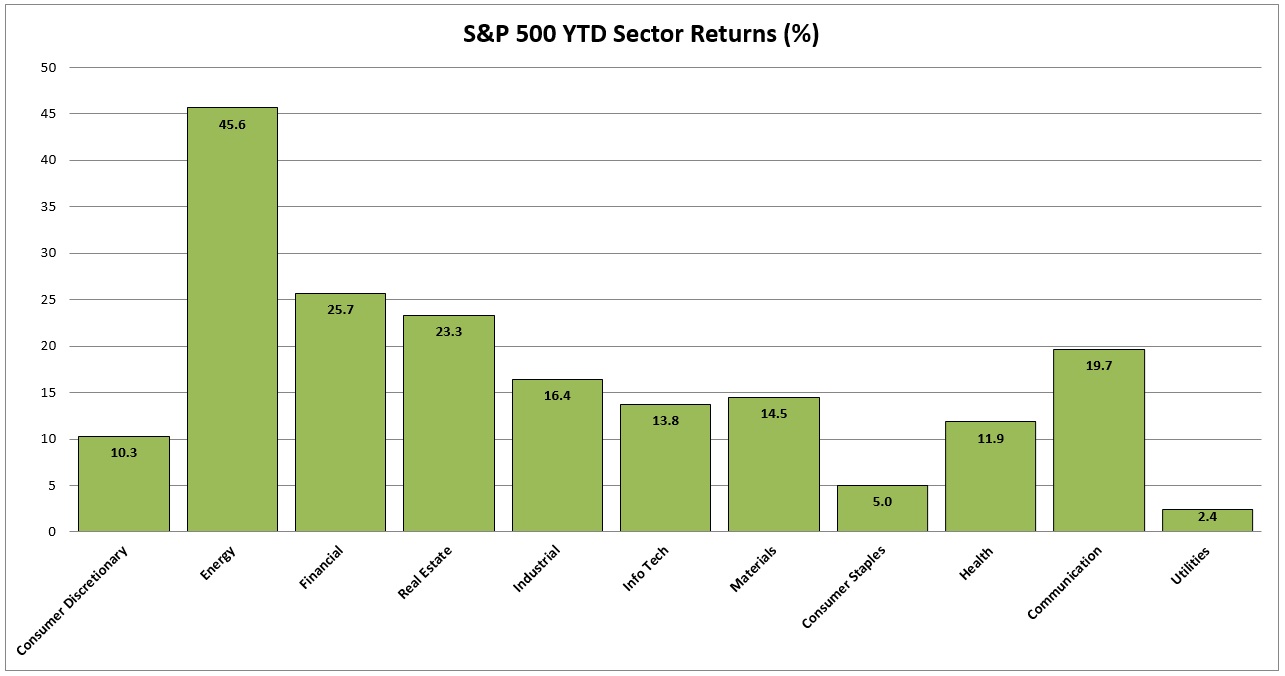 Bonds experienced positive gains in the quarter with the Barclay Intermediate Government Credit Index up 0.98%. Emerging market bonds returned more than 4% for the period while high-yield and Treasury Inflation-Protected Securities (TIPS) returned approximately 3%.

After almost doubling in the first quarter, the rate on the 10-year Treasury bond dropped from 1.74% to 1.45% by quarter end. The drop in yields benefited longer dated bonds, helping to erase some of the losses sustained in the first quarter. Long-term Treasuries were up 6.5% for the quarter. On a trailing twelve-month basis these bonds are down 10.6%.

Yields on high-yield bonds are at all-time lows. Spreads, which is the excess yield above Treasury bonds, are well below their 20-year average for all corporate bonds. 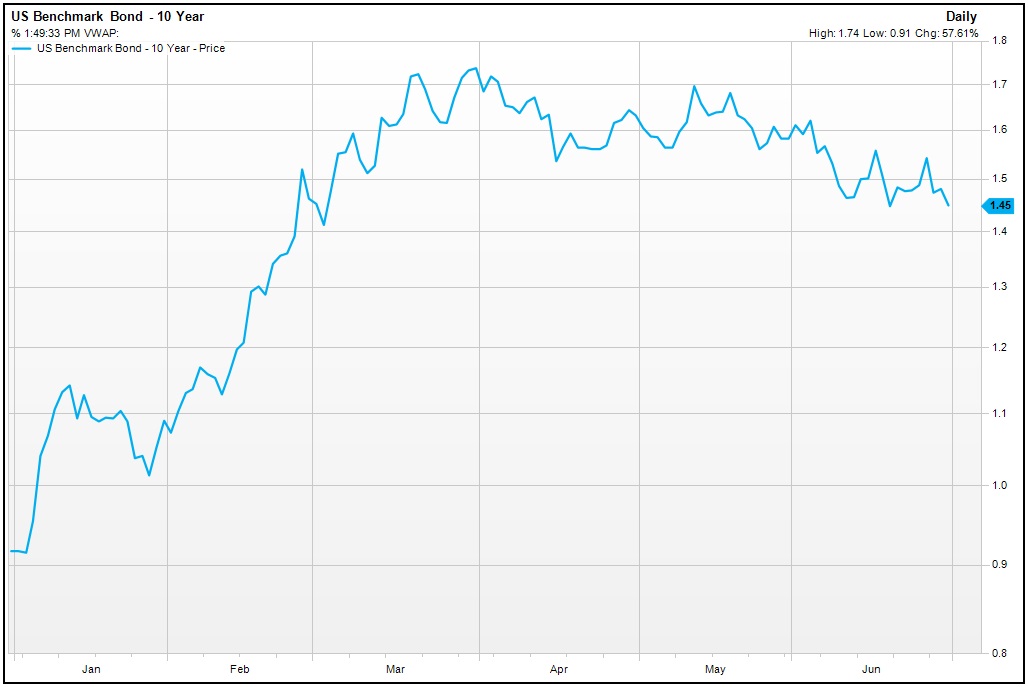 The concept of “peak” can be misleading. The analogy evokes an image of a mountaintop. Once you reach the peak, or summit, the only logical next step is down. Ascend. Peak. Descend.

In the context of today’s recovery, “peak” indicates a top speed – the economy will continue to grow as will earnings and job formation, just not as fast. After the reopening wave abates, a more settled, sustainable pace is ahead. We will continue to keep a close eye on the activity and, as always, are here to discuss the implications for your particular situation.

Warm wishes for a summer filled with family, friends and a little fun.