As the year came to a close, most of the world was ready to close the door on 2020 and embrace the possibilities a new year could bring. If 2021 is the year of new beginnings, the first quarter did not disappoint.

Meme stocks, which trade more on hype than fundamentals, circulated across message boards, such as Reddit’s WallStreetBets, grabbing the spotlight. Retail investors organized to pressure large institutional investors in stocks such as GameStop and AMC, forcing a “short squeeze” and sending share prices gyrating between extremes. (Click here to read our commentary on GameStop)

Bitcoin, the leading cryptocurrency, doubled in the quarter and has surged 500% since the digital currencies’ latest bull run that started back in October 2020. Non-fungible tokens (or NFTs) entered the mainstream vernacular in 2021. These unique digital assets, such as jpeg images or video clips, made headlines most notably with the sale of the artist Beeple’s NFT work titled “Everydays: The First 5000 Days,” which sold for $69 million at auction.

The United States ushered in a new President in dramatic fashion culminating with politically-charged violence in the nation’s capital days before the transition. The new administration wasted no time implementing an aggressive approach to virus management, announcing an ambitious goal to vaccinate 100 million citizens within 100 days. That goal was achieved in less than 60 days prompting the administration to raise the bar to 200 million vaccinations.

The $1.9 trillion American Rescue Plan Act was passed, providing additional resources and financial stimulus to families, small businesses and state and local municipalities. The bill’s passage had economists raising economic growth estimates in 2021 and beyond. 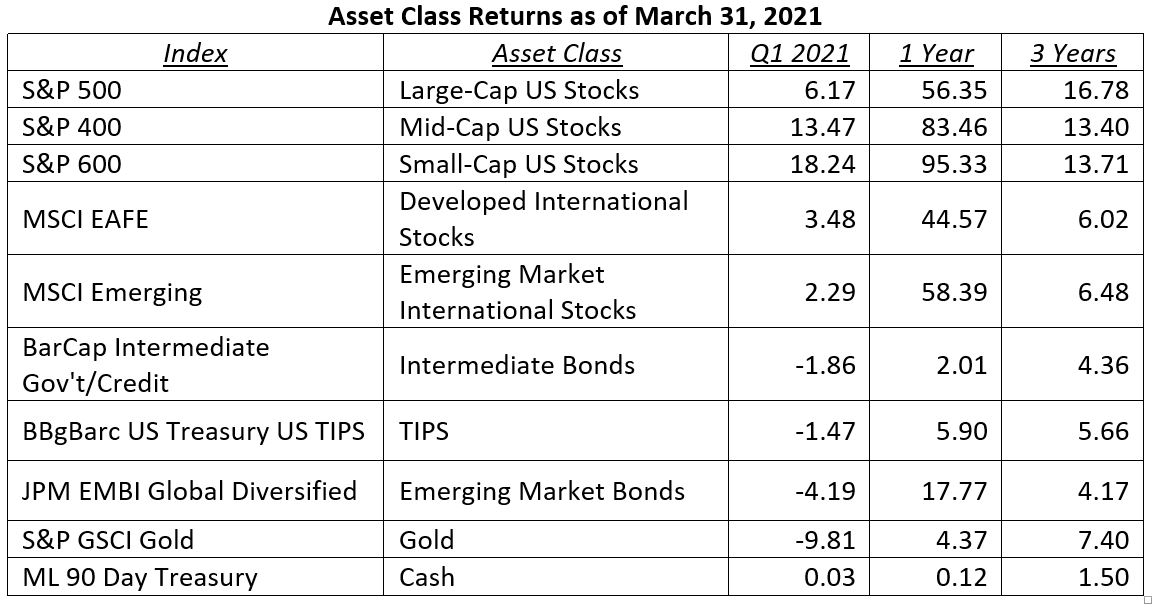 Fourth quarter 2020 U.S. gross domestic product (GDP) grew by a seasonally-adjusted 4.3%. For 2021, economists are predicting GDP could top 6% for the first time in more than 35 years. Current consensus of 6.4% GDP is substantially higher than the pre-stimulus estimate of 4.7%. Growth estimates for 2022 and 2023 are also moving higher as many analysts see stimulus effects lasting well beyond the next few quarters.

Nonfarm payrolls increased 916,000 in March – well above consensus of 658,000. The U.S. has recovered 14 million of the 22.4 million jobs lost during the pandemic. The current unemployment rate (as of this writing) stands at 6%. Federal Reserve Bank of Atlanta President Raphael Bostic recently stated, “A million jobs a month could become the standard through the summer.” This statement echoed prior remarks from Federal Reserve Bank of New York President John Williams.

The Fed funds rate remains at a very accommodative 0.0 to 0.25% target range. Inflation readings have picked up recently but remain within the Fed’s comfort zone.

Equity markets continued their upward trend. During the first quarter of 2021, the S&P 500 notched more than 15 new all-time highs, settling at 3,994 at quarter close. Due in part to the short, steep selloff that started last February and the strong market recovery since, the twelve-month trailing return for the S&P 500 was an impressive 56.35%. As good as that return was, emerging markets (58.39%), mid-cap (83.46%) and small-cap (95.33%) performed even better!

A rotation that began in the final quarter of 2020 favoring mid-cap, small-cap and value stocks over large-cap U.S. growth stocks continued through the first quarter. Small-cap value returned 21.2% in the quarter compared to just 0.9% for large-cap growth.

Technology stocks ceded their long-held performance leadership role. The best performing sector for the quarter was Energy (+30.9%), followed by Financials (+16.0%). Technology was one of the worst performers (+2.0%) underperforming the overall market.

Valuations for U.S. stocks appear stretched by traditional measures. If, however, one considers the substantial improvement in earnings expectations, anticipated economic growth and current earnings yield versus bonds, the perspective changes and the view becomes more constructive.

The slight increase in 10-year Treasury bond rates experienced in the fourth quarter of 2020 accelerated in the first quarter of 2021. Yields almost doubled from 0.91% to 1.74%. Bond prices move in the opposite direction of yields, resulting in the U.S. aggregate bond market delivering a -3.4% return. Long-term government bonds were the worst performer, returning -12.8%.

While the total return was negative, the current yield on the 10-year Treasury closed the quarter at 1.74%, an 89% increase – good news for income-seeking investors. 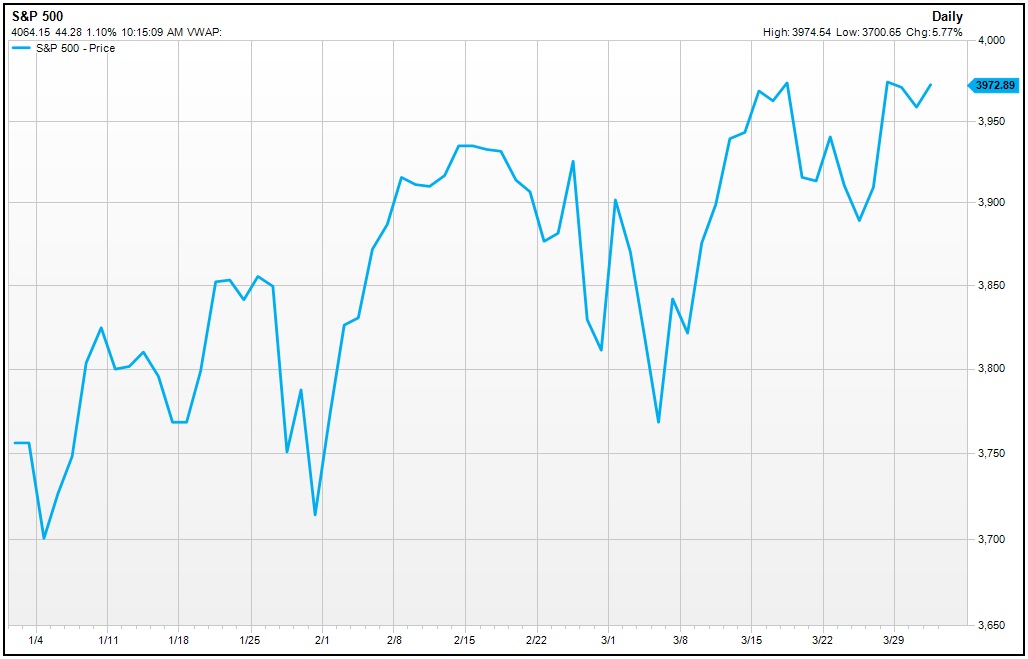 The highlighted box in the chart shows the big move in 10-year Treasury yields during the first quarter.

Not all bonds performed the same. High Yield (+.9%) and Floating Rate (+.22%) helped offset some of the decline experienced in investment grade corporates (- 4.7%) and Treasuries (-7.0%). Municipal bonds also delivered positive returns on the news that the $1.9 trillion stimulus package included $350 billion in federal aid to state and local governments. High-yield municipal bonds were up 2.1% and short-term Treasury Inflation Protected bonds (TIPS) returned 1.1%.

By most measures, U.S. and global economies are growing at some of the fastest rates in decades. With more than $4.5 trillion in stimulus injected into the U.S. financial system over the last 12 months and the possibility of another major infrastructure package on the way, the stage is set for a new economic cycle to emerge.

The innovations in finance, transactions, commerce and capitalism are in early innings. While not all cryptocurrencies (roughly 4,000 exist currently) will be widely adopted and many SPACs will fail, the concept of decentralized finance and blockchain ledgers suggest an era of new possibilities, reminiscent of the beginnings of the “internet age.”

It’s an exciting time. We will be watching, learning and adapting while remaining nimble, because Nothing In Modern Business Lasts Eternally.

Wishing you the best.