Cape Cod 5 provides links to other websites for convenience and information purposes only. Users should be aware that when they select this link to an external website, they are leaving the Bank's website. Cape Cod 5 is not responsible for the contents of any linked site or the contents of any link contained in a linked site. The inclusion of a link does not imply endorsement by the Bank or the site, its content, advertisers or sponsors.

“The best way out is always through”

In New England, there is a saying, “If you don’t like the weather, wait a minute.” In 2022, you could say that if you didn’t like the conditions around you, wait a minute, but you could not predict, or even imagine, what that next minute might bring.

2022 began the year heading for new highs on various levels. The S&P 500 reached an all-time peak of 4,797 on January 3rd; many stock valuations climbed well above historical levels and early corporate earnings releases in January were exceeding predictions for the prior quarter and year. But other highs were emerging as well:

The United Kingdom mourned the loss of its longest reigning monarch, Queen Elizabeth II, while unrelated turmoil ensued in the British parliament. Campaigning was well underway for mid-term elections in the U.S. and inflation became a debate weapon. Many anticipated a Republican majority would return to the House and Senate in November. However, Senate Democrats improved their numerical majority, while only a modest Republican majority was achieved in the House of Representatives. As the year progressed, inflation, interest rates and the possibility of recession became a daily discussion topic of financial analysts, money managers, politicians and anyone buying gas or shopping for groceries.

On a positive note, the world was generally open for business with travel, recreational activities, services and consumer spending all strong for 2022. The U.S. labor market remained resilient with the unemployment rate ending at 3.5% in December, after 223,000 new jobs were added.

The Consumer Price Index (CPI) peaked at a year-over-year (YOY) increase of 9.1% in June. In that month alone, gasoline prices had increased 11.2% over the prior year. CPI had somewhat moderated through November, coming in at 7.1% YOY, representing the fifth month of decline. Core goods declined in November, but most notable was a drop in used car prices. In the Bureau of Labor Statistics’ most recent report for November, vehicle spending fell 3.3% over a 12-month period. After having climbed 43.0% from February 2020 to September 2022, used car prices dropped 8.0% over a one-year period through November, according to Cars.com. The improvements in microchip supplies and new car production contributed to the drop in prices. November was the first month in 22 months in which new car prices did not increase. AAA reported that more than 50 million people drove 50 miles or more over the Thanksgiving holiday and, according to AAA, the average price per gallon of gas was $3.60, down from a peak of $5.02 in June. As of December 28th, the average cost per gallon had dropped to $3.13. Inflation in the services sectors, however, remains high and often lags a drop in the goods area.

Fairly early in 2022 it was becoming clear that inflation in the US was taking firm root. In March, the Federal Reserve instituted its first of seven rate hikes, totaling 4.25% after the last 0.50% increase on December 14th. With inflation reaching levels not seen in over 40 years, the Federal Reserve matched the rise with their most aggressive rates hikes in decades. The increase in rates is intended to slow down the economy by impacting demand, which ultimately will temper inflation. These rate hikes translated into higher interest rates in the fixed income arena. The 10-year and 2-year Treasury began 2022 with a respective yield of 1.5% and 0.73%; both closed the year with meteoric rises ending at 3.88% and 4.41%, respectively. Even money market rates ended the year with yields in the 4.15% range, as compared to 0.03% on January 1, 2022. These increases are a positive for investors seeking higher yields on low-risk investments, like Certificates of Deposit and Treasury bonds. When rates are higher on 2-Year Treasuries versus 10-year Treasuries, it is referred to as an inverted yield curve. Typically, investors are rewarded with higher rates for locking their funds into longer maturity periods. This inverted yield curve historically has signaled recessionary periods ahead, hence the rise of uncertainty in financial markets. The Federal Reserve’s goal in raising rates is to tame inflation and keep prices from soaring out of control. Achieving this goal takes a delicate balance, as rates that rise too high, too quickly can tip the economic scales into recession. As noted above, prices in some areas have abated, but at the last Federal Reserve meeting of 2022, Chair Powell indicated that the Fed anticipates three additional quarter point increases in 2023, an increase to the original target rate. The rise to a new target rate will be slower and shallower, in response to the ongoing inflation in services industries. Slowing the pace will allow the Federal Reserve to assess the impact of the concentrated increases of 2022. 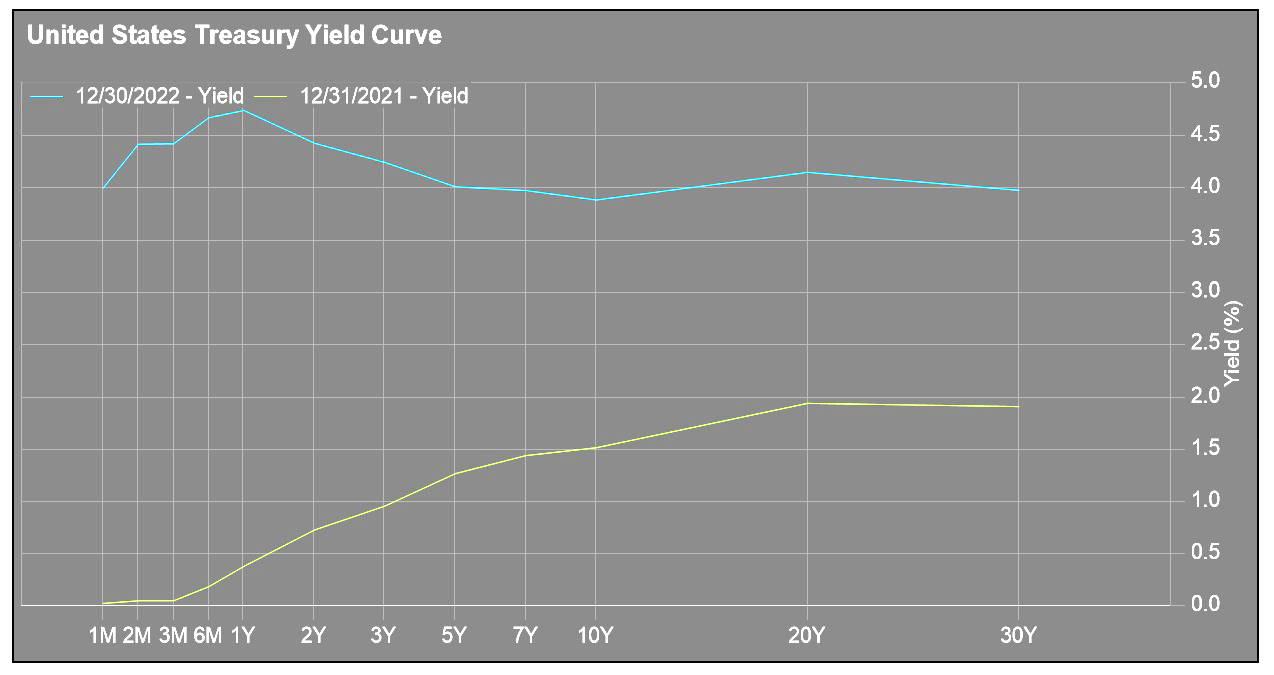 At our last writing, the S&P ended the third quarter down 23.9% year-to-date, closing the quarter at 3,585. Based on strong corporate earnings, the index briefly surged during the fourth quarter to just above 4,000 at the end of November. After partially retracing its steps, the index managed to finish in positive territory for the quarter, up 7.6%, closing the door on 2022 in negative territory at -18.1% for the year. The Dow Jones Industrial Average joined the S&P 500 with a positive Q4 return of 16.1%. The tech-laden NASDAQ index logged in four negative quarters and finished 2022 down 32.4%.

Energy was the star sector for the fourth quarter and all of 2022. Ten of the eleven S&P 500 sectors turned in positive returns in the fourth quarter. Energy finished the year 65.7% higher, with Utilities coming in a far-distant second, barely eking out a positive return at 1.6%. All other sectors finished in the red. What goes up must come down, and the 5 technology stocks — AAPL, GOOG, MSFT, AMZN and META (formerly Facebook), which represented a quarter of the S&P 500 in 2021 and contributed roughly a third of that year’s 28.7% return — had significant negative returns in 2022. Apple’s market capitalization on January 3, 2022 was just shy of $3 trillion. By December 28, 2022, Apple had shed just over $1 trillion in market value. The Technology sector was down 28.9%, which attributed to approximately 44.0% of the S&P 500’s 2022 decline. All said, Apple appreciated by 35.0% in 2021 and dropped by 28.0% in 2022.

Around the globe, international equities outperformed U.S. companies for the year. The MSCI EAFE Index had a strong fourth quarter, returning 17.7%  — more than doubling S&P 500’s 7.6% return  — with strong Q4 returns as China reversed it zero-COVID stance. Many analysts predicted that Russia’s restrictions of oil and natural gas in Europe would be debilitating to the economy, but Europe has proved to be very resourceful, not only in seeking alternative sources of energy, but in managing energy consumption. The Eurozone is experiencing similar inflation to the U.S., with some moderation in the final two months of the year. The European Central Bank responded to inflation with four rate increases in 2022 and a reduction in its balance sheet, as had the Federal Reserve. 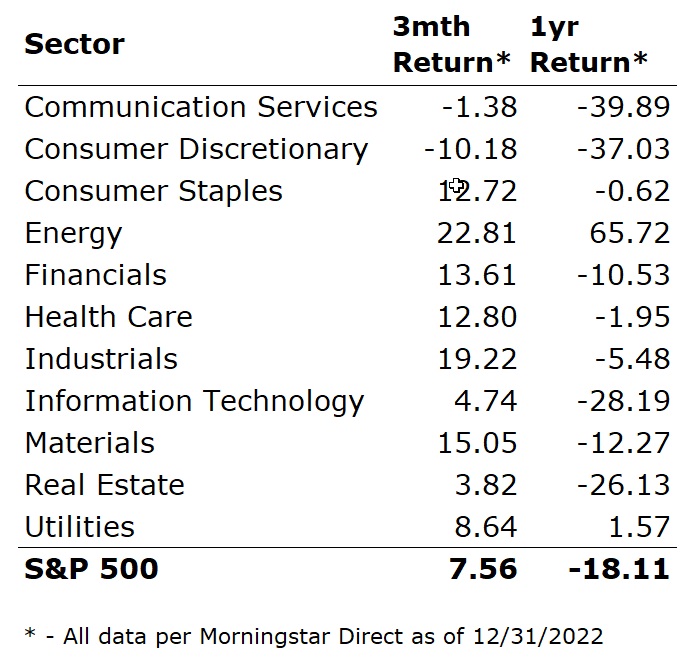 The Federal Reserve’s rate increases to attack inflation impacted Fixed Income instruments as dramatically as equities this year. Bond values have an inverse relationship to interest rates. Simply put, when rates rise, current bonds with lower rates are not as attractive. The price of the bond drops, so the annual interest rate, as a percentage, matches the new higher rates. Investors balance stock portfolio with bonds typically to provide an anchor in volatile equity periods. Only four times in almost 100 years have stocks and bonds fallen in the same year. This year, both the S&P 500 and Bloomberg Barclay’s Aggregate fell more than 10%, with the bond index returning -13.0%.

In inflationary times, precious metals are considered a hedge against inflation, as they hold purchasing power for longer periods of time. Gold was stable during 2022 with a flat return and worked well as a hedge against equities and fixed income. Bitcoin and cryptocurrencies, so attractive to more aggressive investors in 2021, lost significant value in 2022. Bitcoin alone dropped nearly 65.0%. Several major cryptocurrency firms went bankrupt in 2022, the most visible being FTX in November. The dollar, however, had a strong year, joining the “list of 2022 highs,” having skyrocketed 18% from January 1 through September. A high dollar impacts multinational U.S. companies, as the cost of doing business overseas is more expensive.

Economic cycles are a normal part of investing. The bear market of 2022 differs greatly from the Great Financial Crisis in 2008 and 2009. U.S. companies are still very healthy with strong balance sheets, unlike the debt statistics that emerged in 2008. Unemployment is very low and therefore, consumers can spend to fuel the economy. For investors that remained invested, a portfolio of 60% equities/40% fixed income recovered to its previous highs in 19 months from the low in March 2009. This same 60/40 portfolio is now yielding 3% compared to 1.5% a year ago, which is a positive.

In volatile times, Robert Frost’s statement that “The best way out is always through” remains sound. Having an investing plan and adhering to it is the best path through uncertain times. Maintaining balanced allocations remains the wise course, while avoiding the temptations of the transitory “winners of the day” or trying to time the markets by exiting asset classes without a sound rationale. Looking ahead, corporate earnings may not be as robust as anticipated and a recession may emerge in the first half of 2023. But history validates that markets have rebounded significantly in the twelve months following the last seven bear markets. Equities often bottom before corporate earnings, improve before unemployment peaks, gain in the year following mid-term elections, at the end of Fed rate hike cycles and before a technical recession ends.

At Cape Cod 5, we value your confidence in us as your trusted financial advisor and look forward to continuing to seek the best path through economic and financial uncertainties in 2023.

Best wishes for a Happy and Healthy New Year.